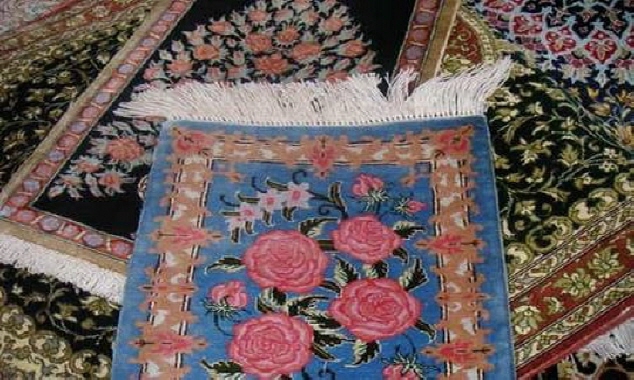 The term carpet comes from Old Italian carpita, carpire meaning to pluck. The term carpet is often used interchangeably with the term rug. Some define a carpet as stretching from wall to wall. Another definition treats rugs as of lower quality or of smaller size, with carpets quite often having finished ends.
Historically the word was also used for table and wall coverings, as carpets were not commonly used on the floor in European interiors until the 18th century, with the opening of trade routes between Persia and Western Europe.
Information taken from the carpet service Markovic

Carpets made ​​of synthetic materials

Nylon is the most common material for construction of carpets. Both nylon 6 and nylon 6-6 are used. Nylon can be dyed topically or dyed in a molten state (solution dying). Nylon can be printed easily and has excellent wear characteristics. In carpets Nylon tends to stain easily because it possesses dye sites on the fibre. These dye sites need to be filled in order to give Nylon any type of stain resistance. As nylon is petroleum-based it varies in price with the price of oil.

Polypropylene is used to produce carpet yarns because it is inexpensive. It is difficult to dye and does not wear as well as wool or nylon. Polypropylene is commonly used to construct Berber carpets. In this case, polypropylene is commonly referred to as olefin. Large looped olefin Berber carpets are usually only suited for light domestic use and tend to mat down quickly. Berber carpets with smaller loops tend to be more resilient and retain their new appearance longer than large looped Berber styles. Commercial grade level-loop carpets have very small loops, and commercial grade cut-pile styles are well constructed. When made with polypropylene these styles wear very well, making them very suitable for areas with heavy foot traffic such as offices. Polypropylene carpets are known to have good stain resistance but not against oil based agents. If a stain does set, it can be difficult to clean. Commercial grade carpets can be glued directly to the floor or installed over a 1/4 thick, 8-pound density padding. Outdoor grass carpets are usually made from polypropylene

Wool has excellent durability, can be dyed easily and is fairly abundant. When blended with synthetic fibres such as nylon the durability of wool is increased. Blended wool yarns are extensively used in production of modern carpet, with the most common blend being 80% wool to 20% synthetic fibre, giving rise to the term 80/20. Wool is relatively expensive and consequently a small portion of the market.

The polyester known as PET (polyethylene terephthalate) is used in carpet manufacturing in both spun and filament constructions. After the price of raw materials for many types of carpet rose in the early 2000s, polyester became more competitive. Polyester has good physical properties and is inherently stain-resistant because it is hydrophobic, and, unlike nylon, does not have dye sites. Colour is infused in a molten state (solution dyeing). Polyester has the disadvantage that it tends to crush or mat down easily. It is typically used in mid- to low-priced carpeting.Another polyester, PTT (Polytrimethylene terephthalate), also called Sorona or 3GT (Dupont)or Corterra (Shell), is a variant of PET. Lurgi Zimmer PTT was first patented in 1941, but it was not produced until the 1990s, when Shell Chemicals developed the low-cost method of producing high-quality 1,3 propanediol (PDO), the starting raw material for PTT Corterra Polymers.

Acrylic is a synthetic material first created by the Dupont Corporation in 1941 but has gone through various changes since it was first introduced. In the past Acrylic used to fuzz or pill easily, this happened when the fibres degraded over time and short strands broke away with contact or friction. Over the years Acrylics have been developed to alleviate some of these problems although the issues have not been completely removed. Acrylic is fairly difficult to dye but is colourfast, washable and has the feel and appearance of wool making it an ideal rug fabric.

Carpets made ​​from natural fibers

The Persian carpet is a part of Persian (Iranian) art and culture. Carpet-weaving in Persia dates back to the Bronze Age.The earliest surviving corpus of Persian carpets come from the Safavid dynasty (1501–1736) in the 16th century. However, painted depictions prove a longer history of production. There is much variety among classical Persian carpets of the 16th and 17th century. Common motifs include scrolling vine networks,arabesques, palmettes, cloud bands, medallions, and overlapping geometric compartments rather than animals and humans. This is becauseIslam, the dominant religion in that part of the world, forbids their depiction. Still, some show figures engaged either in the hunt or feasting scenes. The majority of these carpets are wool, but several silk examples produced in Kashan survive.Iranian carpets are the finest in the world and their designs are copied by weavers from other countries as well. Iran is also the worlds largest producer and exporter of handmade carpets, producing three quarters of the worlds total output and having a share of 30% of worlds export markets. Iran is also the maker of the largest handmade carpet in history, measuring 60,546 square feet.

Carpet weaving may have been introduced into the area as far back as the eleventh century with the coming of the first Muslim conquerors, the Ghaznavids and the Ghauris, from the West. It can with more certainty be traced to the beginning of the Mughal Dynasty in the early fifteenth century, when the last successor of Timur, Babar, extended his rule from Kabul to India to found the Mughal Empire. Under the patronage of the Mughals, Indian craftsmen adopted Persian techniques and designs. Carpets woven in the Punjab made use of motifs and decorative styles found in Mughal architecture.

Akbar, a Mogul emperor, is accredited to introducing the art of carpet weaving to India during his reign. The Mughal emperors patronized Persian carpets for their royal courts and palaces. During this period, he brought Persian craftsmen from their homeland and established them in India. Initially, the carpets woven showed the classic Persian style of fine knotting. Gradually it blended with Indian art. Thus the carpets produced became typical of the Indian origin and gradually the industry began to diversify and spread all over the subcontinent.

During the Mughal period, the carpets made on the Indian subcontinent became so famous that demand for them spread abroad. These carpets had distinctive designs and boasted a high density of knots. Carpets made for the Mughal emperors, including Jahangir and Shah Jahan, were of the finest quality. Under Shah Jahans reign, Mughal carpet weaving took on a new aesthetic and entered its classical phase.

The Indian carpets are well known for their designs with attention to detail and presentation of realistic attributes. The carpet industry in India flourished more in its northern part with major centres found in Kashmir, Jaipur, Agra and Bhadohi.

Indian carpets are known for their high density of knotting. Hand-knotted carpets are a speciality and widely in demand in the West. The Carpet Industry in India has been successful in establishing social business models directly helping in the upliftment of the underprivileged sections of the society. Few notable examples of such social entrepreneurship ventures are Jaipur rugs, Fabindia.

Another category of Indian rugs which, though quite popular in most of the western countries, have not received much press is hand-woven rugs of Khairabad (Citapore rugs). Khairabad small town in Citapore (now spelled as Sitapur) district of India had been ruled by Raja Mehmoodabad. Khairabad (Mehmoodabad Estate) was part of Oudh province which had been ruled by shii Muslims having Persian linkages. Citapore rugs made in Khairabad and neighbouring areas are all hand-woven and distinct from tufted and knotted rugs. Flat weave is the basic weaving technique of Citapore rugs and generally cotton is the main weaving material here but jute, rayon and chenille are also popular. Ikea and Agocha have been major buyers of rugs from this area.

At present, hand-knotted carpets are among Pakistans leading export products and their manufacture is the second largest cottage and small industry. Pakistani craftsmen have the capacity to produce any type of carpet using all the popular motifs of gulls, medallions, paisleys, traceries, and geometric designs in various combinations.

Recently, at the time of independence, manufacturing of carpets was set up in Sangla Hill, a small Town of District Sheikhupura. Chaudary Mukhtar Ahmad Member son of Maher Janda introduced and taught this art to locals and immigrants. He is considered founder of this industry in Pakistan.Sangla Hill is now a focal point in Carpet Industry in Pakistan.Almost all the exporters and manufacturers who are running their business at Lahore,Faisalabad and Karachi have their area offices in Sangla Hill.

Some of the rules for home decorating with rugs

The first and foremost rule of experts interior design is just 1/3 of the surface. This means that in a standard room of approx. 20m2 (4x5m room) the carpet should be at least 6m2 (standard size 2x3m) to meet the aesthetic and functional dimension of the internal organization and the proper boxes highlight both the floor and the furniture in your home. This of course can be achieved by combining two or more smaller rugs that are in a very attractive way of combining complementary in terms of colors and patterns. The modern-style homes longer rare combination of styles, for example. a modern rug muted, pastel colors fit perfectly with the sumptuous, traditional type of furniture.